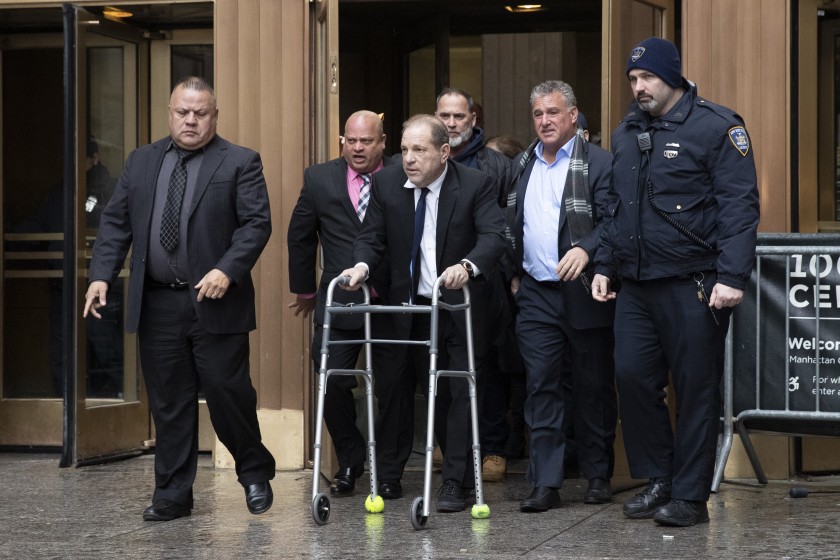 Weinstein denied “Any Non-Consensual Sex.” – his psychological belief. What made him say so? Why did he think his act was an agreed affair? Why did not the women not report to the police & government authorities? Why they submissively accepted? Why they repressed & thus abetted, thus energising his immoral strength to repeat with others? Why aware of his lecherous history as claimed by many they became a victim? Where they not being like an opportunist who held hidden motive of benefits to receive as lured by him & as records speak, many did gain though he victimised them as he believed it was consensual. Undoubtedly, Weinstein’s act was abominable; soon, he was dismissed & expelled from professional associations & retired from public view. Later Criminal investigations on complaints, led to his arrest in New York, charged with rape & other offences later to be released on bail.

The scandal triggered many similar allegations against powerful men around the world, and a high number of women shared their experiences of sexual assault, harassment, or rape, under the hashtag #MeToo.

The “ Weinstein effect” speaks aloud of many psychological factors which need to be resolved, mere criticism or blame game is not a solution for the psychological volcano. Protesting & expressing agony, yet forgetting to identify roots & clipping some jungle weeds or maybe a wild banyan like Weinstein is not enough, its just tip of the glacier as Cases were reported world over, In India too there was a movie by the name “ Sanju “ in which the hero autobiographically flaunts the fact, that in his few years of acting career he slept with more than 300 plus. Do we define this as heroism & follow the example, or is it that it was consensual? How can it be justified? As India, due to its sociocultural climate discourages the women to agree. The educational atmosphere of USA, UK, Europe & many countries recognised & allow such issues to be voiced. Agreed Weinstein deserves strong punishment. Still, the fact that many prominent got away, thanks to abetting by the victims, social factors, becoming a beneficiary or hesitating to oppose devil incarnates or praying to God, for the dust to settle down, never helped & never will.

The glamorous painting of few women is a dangerous social practice for many & particularly the ones who are enclosed in four walls of the office or home, who, unfortunately, present women as a commodity by shrewdly playing with the mind of spectators targeting their basic instincts. The few Divas and fashion icons well protected by their security squads get foolishly imitated by the streetwalkers and public servants, only to become an easy victim. Glamorising is a phenomenon to attract & exploit commercial & other benefits.

The first crime of Weinstein deserved reaction but unfortunately, thirty years passed encouraging the perpetrator to commit many more. So be it awards provided by the Weinstein’s company or be it cash or any kind, no incentives can compromise the intrusion in individuals privacy has done or pursued or conceived for future. One wishes they were not just delayed whispers but loud outcries in the very start. The holy scriptures of all religions endorse to protect, secure & to retaliate to crime, Yet opportunism or utilitarianism in the society is the root of such incidents which multiplies confidence of the perpetrators.

We all possess compassion due to victims but certainly can not endorse their capitalisation vision which invited the trouble and mere belief that their voice would not be heard or was not heard, so they aborted the thought of raising it or pursuing it. Later though, Hashtag Me Too (#MeToo) became a revolution & many cases of snubbed conversation started sounding loud and clear. Even the “Weinstein Effect” became a global trend in which people come forward to accuse famous or powerful men of sexual misconduct.

The Me Too movement (or #MeToo movement), is now a movement against sexual harassment & sexual assaults, to empower women through empathy & strength in numbers, especially young & vulnerable women, by visibly demonstrating how women have survived sexual assault and harassment, especially in the workplace & help victim in psychological rehabilitation.

The “ LATEST UPDATE “ that 30 women have reportedly reached a $ 25 m settlement to be approved by the court to bring an end to most of the civil lawsuits pending against Harvey Weinstein, further New York Times has reported about the tentative deal to acquit Weinstein. The entire psychological cycle and its impact on the world community is important.

The New York Times says, once the last hurdles of court approval are cleared payouts would be made by insurance companies handling the bankruptcy of the Weinstein Company, thus Harvey Weinstein himself would not have to pay a penny to his accusers nor admit wrongdoing under the terms of the settlement. The many women organisation feel it would be unfair & the government of the people, by the people, for the people must set a precedence to curtail such atrocities, adverse to civilisation, along with identifying the source of such gross misconduct & how the law must pronounce justice not structured compromises.

It is unfortunate that financial deals would work like sand storms which transform mountains into plains. The delayed blames aren’t enough in front of such financial moguls, and financial compromise would only encourage examples of extensively rich to getaway along with hinting scrupulous few women to blackmail or exploit even the innocent in the pretext for financial benefits.

It is important to discourage males who misuse power in outraging modesty of the women and is equally important to discourage scrupulous few females to put to use seduction and manipulation to carve through their path in this cut-throat competition along with overpowering impact of pornography, thanks to unchecked internet invasion has penetrated mind of one and all resulting into psychological illness as displayed by Weinstein.

Psychological lessons to educate lawful mind is the need of the hour to all genders. Favouritism needs to be checked with more transparency. All process of selection and awarding, which incites, aspiring artist or aspirants of promotion needs to be well monitored. Delayed claims must be checked & last but not the least money needs to be valued but not overvalued by setting, precedence for future to check disgrace, but if compromise comes through, scrupulous men or women would repeatedly make efforts to cheat the law. Parameters to define consensual as an evidential process needs to be defined, evidence can be facilitated by technology so that justice is fairly sided both with women & men as a vow before or report after a crime.

Let law punish the scrupulous & safeguard the innocent. God help justice to be served & psychological perception of generation be amended by precedence. Its time policymakers, check enticing glamour from display on-street & public places, to not serve as stimulus to basic instincts, let no hypocrisy rule, law must recognise that human beings are civilised animals thus enticing basic instincts can be hazardous to one and all and if checked can insure kids a wonderful sculpted psychological environment of harmonious living .”