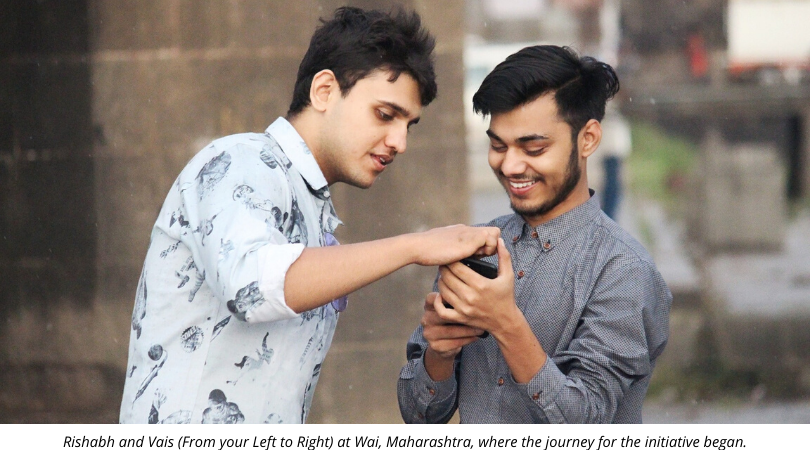 A multi-author publication initiative by authors Rishabh and Vais

We had a chat with two young and dynamic authors from the city of Lucknow, India. Between just the two of them, we have diverse professions of novelist, lyricist, screenplay-writer, dramatist, poet, script doctor, photographer, cinematographer, musician, singer and much more. They are Rishabh Dubey and Vais Siddiqui.

Rishabh and Vais have come out with a new multi-author anthological compilation entitled ‘The Voices of Silence’. The book contains stories and poems by diverse authors across the country of India. The initiative was completely cost-free for the authors and Rishabh and Vais have also committed to launching a new volume of the book every year. To have a better understanding of both the initiative as well as the psychology behind it, we had a close and personal conversation with the two young authors who answered each of our queries individually.

WHAT WAS THE BASIC IDEA BEHIND COMPILING POEMS AND STORIES BY DIFFERENT AUTHORS?

Vais: The idea behind the compilation was to discover budding writers and reveal hidden unheard stories to the world, and to also provide each individual with a platform for and exposure to their work so that they could convey their stories to the masses.

Rishabh: Yes, just as he said, getting your stories out there is generally a very tiresome and lengthy process. We wanted to shorten it for everyone to further motivate people to never quit writing.

WHAT’S THE MEANING BEHIND THE TITLE ‘THE VOICES OF SILENCE’ AND WHY DID YOU CHOOSE IT?

Vais: There is an abundance of writers who do not get to convey their work to the audiences. The idea behind the name was to imply that we seek out the silent voices and wish to make them resonate in the world.

Rishabh: People have so many stories and experiences. Many choose not to express and many don’t ever get to express. Eventually, those memories and imaginations perish in the very silence they existed in. Therefore, we sought to give a metaphorical voice to that silence.

ARE ALL THE IMAGES FEATURED ON THE COVER CLICKED BY YOU? IF YES, WHAT’S THE BIGGER PICTURE BEHIND USING SUCH IMAGES?

Vais: Yes, every identity has a new story to tell and the cover says it all. Every street might look the same, yet contains vastly different stories.

Rishabh: Every single one of those pictures was clicked by the master photographer Vais. He has thousands of such pictures since he has a hobby of strolling around, observing for hours and clicking the perfect shot.

Vais: I believe that the tear of joy would make one happy… But do you cry the same or different tears when you are sad? Perspective differs from person to person. My way of writing could come out only when I’m happy, but there might be someone who copes up with depression through writing.

Rishabh: Aptly said… We are both very similar yet very different in our ways of writing. And I believe we are all poets… we just need to be one with our inner self and our surroundings and the poem would start flowing. There is poetry in every icicle of the world inside and outside us.

WHAT’S YOUR FAVOURITE POEM? WHY?

Vais: It’s called ‘Grass’. Because the poet has used its title as a metaphor, “You Cut me, Burn me, Erode me, but eventually, I’ll grow on every deed of yours”. So it gives me a feeling of confidence and self-belief.

Rishabh: It is a very cliché answer but I cannot be dishonest. ‘Stopping by Woods on a Snowy Evening’ is my favourite poem. It has an unparalleled level of imagery, and consonance with a generic feeling of ecstasy we come by every now and then in our lives. I don’t know one single person in the world who can read the poem without having a smile on their face at the end of it.

HOW LONG HAVE YOU BEEN FRIENDS? ARE THERE GOING TO BE MORE COMPILATIONS IN THE FUTURE?

Vais: We have been friends since childhood. Hopefully… we would love to continue this process in the future so that we can get a chance to give other people a chance and somewhat put our feet in more and more people’s shoes.

Rishabh: We have resolved to take time out for at least one release every year. We have not yet opened up for submissions but have already received so many of them. We’d definitely make an announcement soon.

So, that was a wonderful conversation with the two young men who are doing something great for all those who aspire to write but are demotivated by the complicated process of publishing. We wish the two of them the best of luck for such a benevolent endeavour. Do follow the two young artists on Instagram (@Kridious & @VaisSiddiqui ).