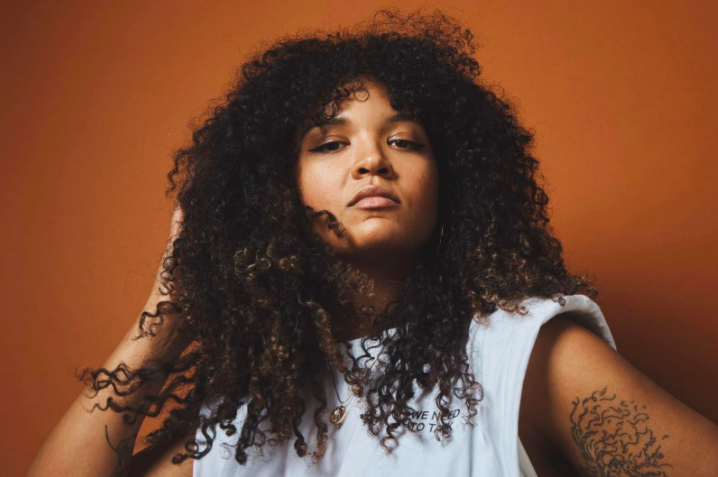 In an age where artistic merit is awarded to those who shout the loudest, Dakota Jones pride themselves on an unwavering ability to leave a lasting impression. Spearheaded by Tristan Carter-Jones fierce and unashamedly uncensored songwriting, the band’s fast-growing reputation as formidable live act has stamped Dakota Jones with the hell-hath-no-fury power of Chaka Khan, the wild spontaneity of Janis Joplin, and the honey-dripping sensuality of Marvin Gaye. Their debut album’s message of proud black heritage and triumphant queerness manifests itself in Carter-Jones’ ability to challenge norms of adulthood and femininity as she takes a deep dive into some of life’s most visceral emotions.

Tristan Carter-Jones: “I’m a black, queer woman expressing myself through love and music. Some folks still find that to be a transgressive act in and of itself. I work to fight that idea. I write a lot about my sexuality and the ways in which I express it. Songs about sex and love bounce back and forth between songs about heartache, hangovers and self-medication, and the pleasure and pain of truly finding yourself. I don’t think we get to hear these things from a woman’s mouth as often as we should.”

Serving as an instant tone setter, the album opens with the line “Stretch marks from growing pains” with Carter-Jones lamenting the woes of adjusting to adulthood on lead single ‘Did It To Myself’ – her husky and commanding vocal instantly asserting its place in the spotlight. The atmosphere soon turns steamy on the flirtatious title track ‘Blacklight,’ whilst fantasising over a modern-day Bonnie & Clyde love affair the funk-laden ‘We Playin Bad Games’ packs a punch with its tale of free spirits entwined in a haze of late-night revelry.

Elsewhere, stories of caustic heartache twist the knife into wounded blues guitar riffs on ‘Like That’ and ‘Black Magic (That Power)’, in which Carter-Jones’s stoical voice never once faulters as she mourns the memories of a previous flame. Personal prayer ‘Lord Please’ recites empowered words of reassurance, and solidarity in the face of injustice erupts into a rallying cry for change on the classic sounding ‘Noise’ – written as a reaction to the 2016 US election.  “I woke up after the election feeling pure panic and fear in my body,” remembers Tristan. “I wanted people in a place of privilege to stand up for what I was feeling, stand up for injustice, stand up for all of the things we need to change as a country. I wanted their rage, and I wanted their noise.”

Finally, the band’s tender tropes of togetherness eventually boil into gritty, guitar-slung balladry on hidden bonus track, ‘California,’ where, knees buckling under the weight of past trials and tribulations, Carter-Jones sets out on one final journey of self-discovery, hastily pulling out from reality and leaving only a dust cloud in her wake.

Dakota Jones are a rising funk, soul and blues rock band from Brooklyn, New York City. Comprising of Tristan Carter-Jones (vocals), Scott Kramp (bass) Steve Ross (drums), and acclaimed musician Randy Jacobs (guitar) – former member of Was(Not Was) who has recorded for Seal, Bonnie Raitt, Tears for Fears, Elton John and many others. Though Carter-Jones and Ross first met in 1999 whilst at primary school, the band formed years later following a series of home jam sessions in 2016. The band’s collective alias originates from Carter-Jones’s middle name, ‘Dakota’. Dakota Jones have since released a string of acclaimed singles and EPs as well as received international attention for their track, ‘Have Mercy’ after it featured on Netflix’s 2019 film, Always Be My Maybe starring Ali Wong and Randall Park – and now after years of hard work and determination, the band are finally set to reveal their long-awaited debut album.  “We’d been regularly releasing EPs, waiting for our chance to come, and wondering what that would look like,” says Carter-Jones. “We didn’t realise until we started making this record that we needed to stop waiting for some break to come along, and just do it ourselves, independently.”

“Black Light really dives into a place of funk soul and everything that comes with it. There’s joy and dancing, sleek guitar licks and funky bass slaps. There’s pain and longing, and there’s the feeling of relief when you come out of that place and find your joy and purpose again. Black Light is my story.”

Bridging the Gap Between Passion and Purpose: How J.R. Tilman Is Redefining Modern literature for Teens

Top 7 Things to Know When Buying a Coffee Grinder

Bold, Beautiful and Talented: Radhika Seth in a Red Bikini