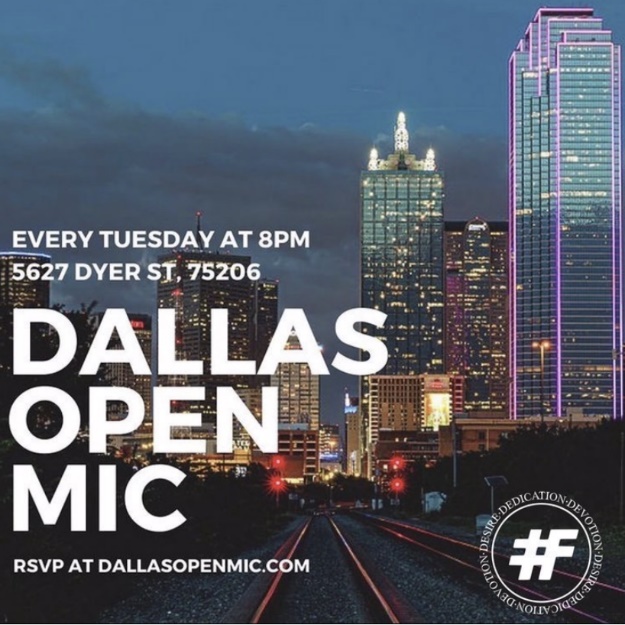 The Dallas Open Mic is an event is open to artists, poets, and speakers, who all come across the nation and showcase their talent given within their performance time and opportunity.Guess what the best part is? It isevery Tuesday. No matter what! The Green Elephant Event Space, 5627 Dyer St, in the heart of Dallas, has some of the most active music and art scenes that partake in this weekly event. For each week, specifically Tuesdays, the event is the Dallas Open Mic. Which is an event founded by Dallas Native, Charlie Rihoo. It gets 250+ people in crowd every Tuesday night!Not only the event has been steady running for the last 4 years, but the crowd also seems to grow every single week with new faces attending.

Everyone who makes this an event to remember every week, has the same opportunity to shine consistently, individually, and collectively. Collaboration tycoon, Charlie Rihoo, has been consistently promoting for years, mentions the foundation in which the event initially started with and remains by. “It’s always first come first serve. We always make sure everything keeps rolling smoothly and making sure it is a safe and welcoming place for those who have not attended, open to all. Making it a fair opportunity for everybody. That is pretty much what we run by here, fairness.” Rihoo, owner of Rihoo Records, and an avid supporter of the local Dallas talent.

Musical artists such as Bama White, Freezy Faucet, Slab Osiris, Henry Boy, Chief Rebel, MusicBoi Trap, and Big Relly, all have played significant roles in the Dallas Open Mic performing weekly. With collaborations that lead to only larger results, promotion has kept the Dallas Open Mic steady each week. The founder of the multimedia brand #Focuseddd, Mobeen Mian, and his team, are also in collaboration with the Dallas Open Mic. The #Focuseddd team actively run the event promotion with interviews, photography, and social media marketing for each aspiring artist and visionary. Artists and entrepreneurs from across the nation have partaken in these interviews with #Focuseddd, including larger metroplex radio stations such as 97.9 the beat. The #Focuseddd news media team is also currently on their promotional tour as well covering stories in multiple states including Texas, New York, California, and Denver.

Anyone is welcome. From the moment you show up to the event it feels like family, and you are no longer alone.Collaborations are open to any entrepreneur, artist, photographer, videographer, and creative out there. Be sure to check out The Green Elephant Event Space, located at 5627 Dyer St, Dallas, TX 75206, every Tuesday night for their event, the Dallas Open Mic!
The founder of the Dallas Open Mic is Charlie Rihoo
The founder of #Focuseddd is Mobeen Mian

Names of and details of artists mentioned: