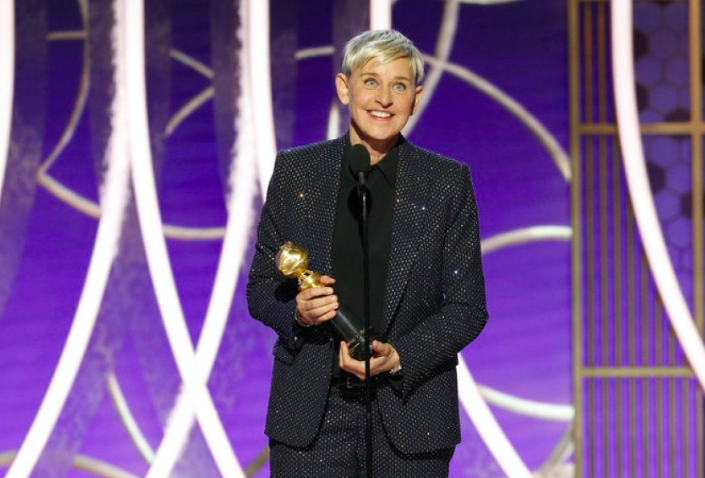 During Sunday’s Golden Globe Awards ceremony in Los Angeles, the Emmy-winning talk show host accepted the Carol Burnett Award for Excellence in Television for her remarkably successful and hard-earned career on the small screen.

In her acceptance speech, DeGeneres, 61, revealed on the ups and downs in her career and jokingly thanked her imaginary family. She thanked her “husband Mark and kids” and quipped that she would not drag on her speech, before going on to tell the story of the day she was born.
Fun aside, Ellen DeGeneres thanked Carol Burnett for inspiring her to become the entertainer she is today.

“I felt like I knew her. I felt like she showed us who she was every week. She was larger than life. We counted on her to make us feel good and she delivered every single week,” Ellen said.

“I always felt like she was speaking to me. At the end of the show, every time she pulled her ear, I knew she was saying, ‘It’s OK. I’m gay, too,'” she said. “Television influenced everything that I am today. Lucille Ball. Mary Tyler Moore, Marlo Thomas, Dick Van Dyke, Bob Newhart, Mannix. There’s a little bit of all of them in me.”

DeGeneres ended her speech by explaining the power of television. “All I ever wanted to do was make people feel good and laugh, and there’s no greater feeling than when someone tells me I’ve made their day better with my show or that I’ve helped them get through a sickness or a hard time with their lives,” she said. “The power of television for me is not that people watch my show, but that they watch my show and then they’re inspired to go out and do the same thing in their own lives. They make people laugh or be kind or help someone that’s less fortunate than themselves and that is the power of television and I’m so, so grateful to be a part of it.”