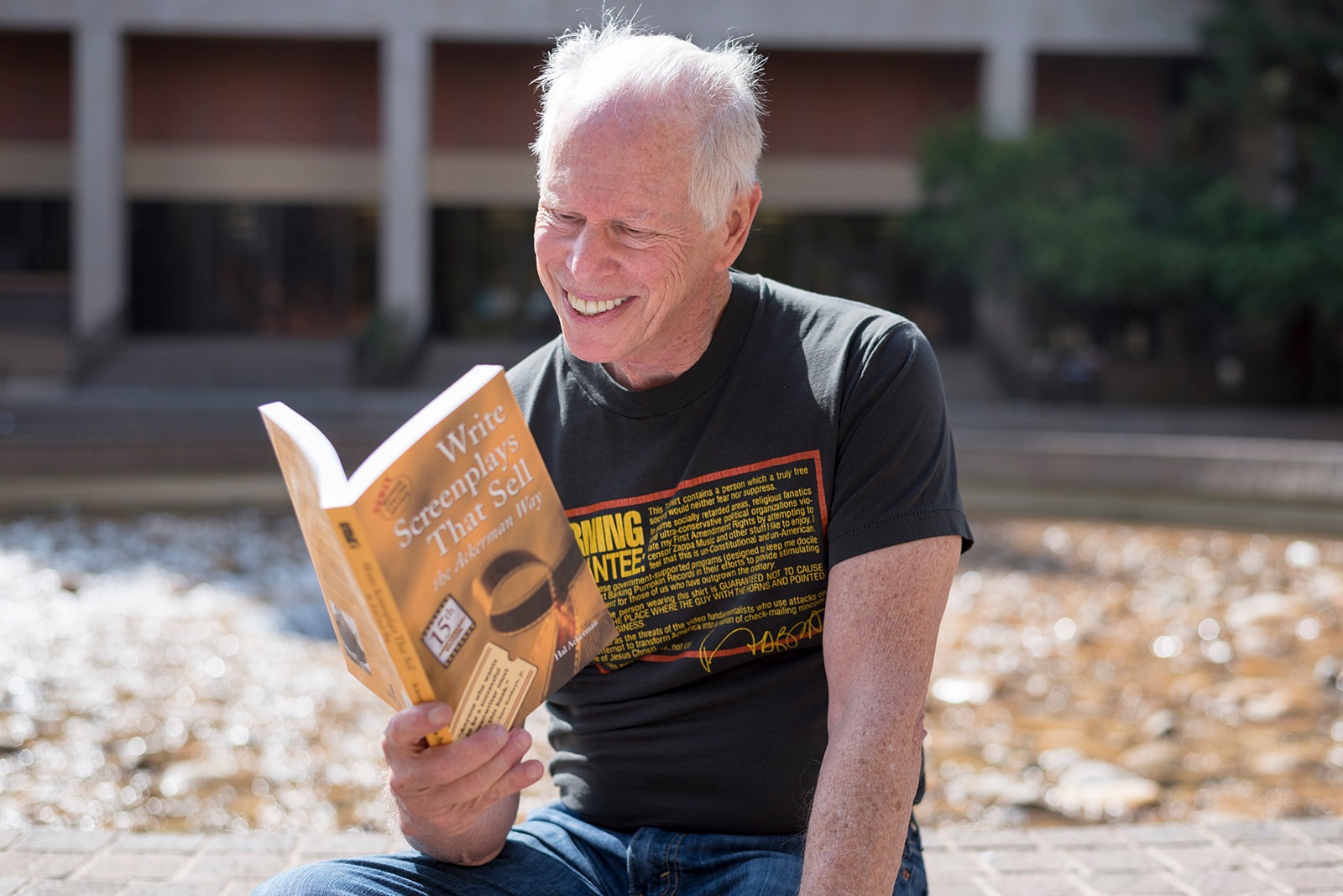 Hal Ackerman – The Man, The Myth, The Playwright

It is said that the influence of a good teacher can never be erased. For the students of Hal Ackerman, his instruction and guidance have left an indelible mark on the trajectory of their careers.

After 30 years of teaching and building the world-class Screenwriting Department at UCLA, he went on to teach at the vaunted Distance Learning MFA program at Queens University in Charlotte, NC. Recently, he has accepted a year’s appointment to teach at Barnard College.

With so many years of pedagogical experience, Ackerman has no shortage of former students who sing his praises.

“Hal Ackerman was my teacher, mentor and guide, but I also think of him as the ‘midwife’ who helped me deliver my script,” says Pamela Gray (writer of A Walk on the Moon, Dirty Dancing 2).

Steven Canals (writer, director, and producer of Pose) adds, “I read Hal’s screenwriting book in 2010. It inspired me (at the tender age of 30) to completely change my life.”

Ackerman is a veritable jack of all trades: award-winning author, father, mentor, playwright, professor. But one of his most impressive descriptors is that of “survivor.” A cancer survivor, to be specific.

In his autobiographical play, Prick (formerly known as Testosterone: How Prostate Cancer Made a Man of Me), Ackerman makes a frank, humorous examination of both his own mortality and the true definition of manhood by way of reflection on his battle with prostate cancer.

“I underwent a non-traditional hormone treatment that turned me into a chemical eunuch,” he said, laughing. “The play is about how we define masculinity when the very thing that defines manhood is taken away. I look at all the relationships that define maleness: father, son, husband, friend and lover. It opens with what I jokingly call a ‘manologue’.”

It is this transparency and vulnerability that lends itself to Ackerman’s work. “All the things you fear will be discovered about you,” he posited in a recent interview. “You don’t have to show your junk to anyone, but if you keep it locked up inside, it will always be the next thing out. Writing is a good way to get rid of it; the only way to find out what’s lurking underneath.”

Clearly, this principle has served Ackerman’s career well: Prick was named Best Play at the 2011 United solo Festival in New York and netted him the William Saroyan Centennial Award for Drama. Additionally, his work has been published in a variety of literary journals, such as New Millennium Writing and The Pinch, and he has sold scripts to major networks and studios.

But Ackerman is not satisfied with reaching the heights of his own ambition. Rather, he constantly seeks to guide his pupils along to their pinnacle of prosperity. For him, it gives the utmost pleasure to pass on his nuggets of wisdom to the next generation of writers.

“My favorite part [of being a professor] is feeling the students’ excitement, knowing I have inspired them to reach more deeply than they believed they could, validating their life stories,” Ackerman revealed during a recent interview.

Indeed, he has proven very successful in this mission, for many of his students have gone on to become significant players in the film and television industries: Michael Werb and Michael Colleary (writers of Laura Croft: Tomb Raider starring Angelina Jolie, and Face Off); Kiley Donovan (writer and executive producer of Grey’s Anatomy); Scott Rosenburg (writer of Con Air, High Fidelity, and Gone in 60 Seconds); and Eric Wald (writer of View from the Top starring Gwyneth Paltrow). The list goes on.

Felicia Henderson, the creator of Soulfood and Executive Producer/Director for Showtime Networks, states that “Hal Ackerman is a brilliant teacher and an amazing inspiration.”

While not everyone can have the privilege of learning from this maestro face to face, fear not, aspiring writers: You, too, can learn from Ackerman through his guidebook, Write Screenplays That Sell – The Ackerman Way – 20th Anniversary Edition: Newly Revised and Updated! Tallfellow Press is proud to be presenting this 20th anniversary edition, now available on all major bookselling platforms and in stores.

“Once you finish this book, you’ll have no excuse for not writing a great screenplay,” declares Sacha Gervasi, director of Hitchcock, writer of The Terminal, and Ackerman student. Another graduate, Nicholas Griffin, writer of Matchstick Men, adds, “Chalk up another victory for alumni of the Ackerman school.”

And you, too, can count yourself in that distinguished group by learning the Ackerman way: Not just with know-how, but with grit and determination.