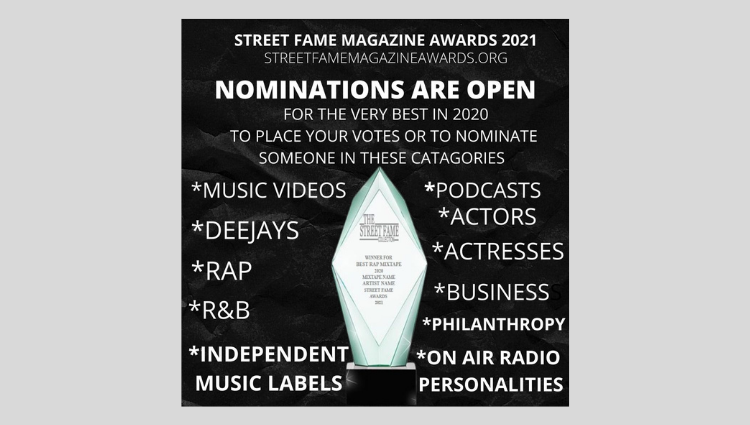 If you’re unaware of Street Fame Magazine and it’s Chairman Horse Wren signature phrase “Street Fame!” You can easily do your research. The company started in 2007 as a college music documentary titled: “The Street Fame Project” and became a college cult classic in the mid-west. Several street famous brands have followed, including the awards show produced by Street Fame and Andrea’s Talent Management. The goal is to award 21 nominated contenders who has the most votes from fans, family, and friends. Simple as that. No panels of experts or judges making the calls. The People are the judges in this process. Who better to decide then the streets? Nobody can argue fowl when it’s strictly up to how many people voted for each person or business nominated.

With the recent snubs in the music and acting categories at these high profile award shows. Street Fame WorldWide Multi-Media Chairman, Horse ‘ El Caballo ‘ Wren decided to produce it’s own version of an award event. Set to stream live and announce winners in the independent fields of acting, music, business, radio, podcasting and community leaders. Votes and nominations are welcomed till March 15th as the show airs March 20th.

How Ralph and his company, Novelty Ink, sold over 1 million items with automated online stores”