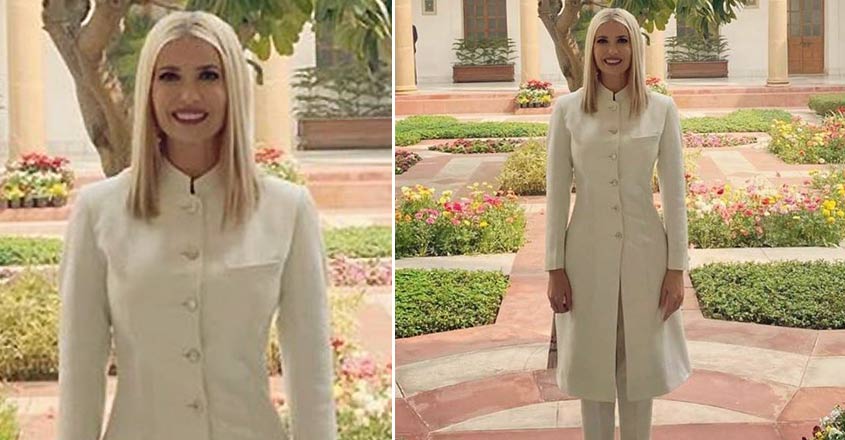 After US First Lady Melania Trump, US President Donald Trump’s daughter Ivanka also went Indian on Tuesday to attend the US president’s ceremonial welcome at Rashtrapati Bhavan. She donned a beautiful Indian Sherwani designed by Indian designer Anita Dongre. The sherwani that Ivanka wore was made of silk from West Bengal, it was a white sherwani crafted from handwoven silk from Murshidabad.

Dongre in a statement said that the sherwani is timeless and a classic.

Dongre said, “We created this style twenty years ago and it’s amazing to see how beautifully relevant it is even today. A powerful, standout silhouette, a sherwani carries the same charisma in absolutely any colour but my personal favourites are the evergreen blue, white and black.”

On Monday, Melania paid homage to Indian textile heritage by accessorizing her white Herve Pierre jumpsuit along with green silk and golden metallic embroidered sash that was discovered by the designer in an early 20th-century textile document. On Tuesday, the US first lady wore a white shirt-dress by veteran Venezuelan fashion designer Carolina Herrera.

She wore Herrera’s bow-detailed embroidered cotton-silk dress that was paired with a red belt and white stilettoes. Herrera, who has always been favourite designer of almost all the first ladies of the US has also dressed Jacqueline Lee Kennedy Onassis, Laura Bush and Michelle Obama.

Entre Institute Reviews Help You Understand How To Make Money