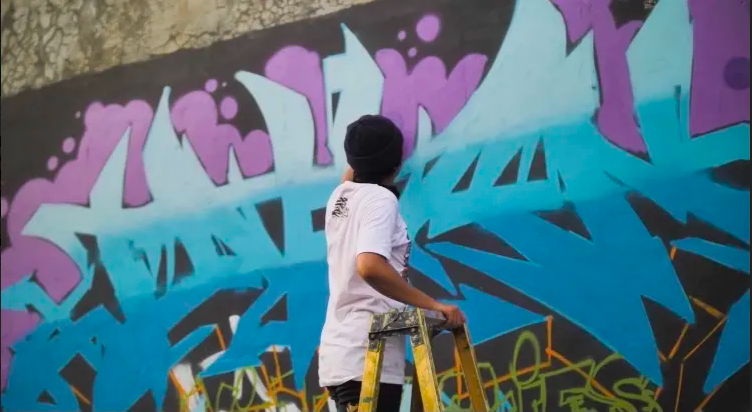 East Coast emcee Jahan Nostra continues his journey in making classic music, and connecting with the people around the world. Fresh off his successful “Nos Olympia” collaboration with France’s DJ Clif on the album, Make A Beat, Nostra is gearing up to keep his brand jumping with new content. He recently released the single, “Picture Frames” featuring Chicago Emcee Curt Cohiba and R&B Singer/Producer Symphony Swingg, and he is now releasing the visuals with a new version of the song “Picture Frames (Jakarta Mix)” available exclusively on YouTube.

A collaboration between Jahan Nostra and Indonesian graffiti artist MeaS7, the video for “Picture Frames” follows the artist in his hometown of Jakarta where he is seen beautifully crafting a custom mural that would be featured on Nostra’s upcoming “Violet Skies” album. The mural also pays homage to the “Wildstyle” graffiti era from the early years of the hip hop culture in The Bronx, and symbolizes how strong the Hip Hop connection is in Asia.

The video promotes Black-Asian unity, and highlights the work of MeaS7, who has been perfecting his craft since 2005, and has made timeless art for various brands and artists around the world. The connection between Jahan Nostra and MeaS7 was an instant one as their backgrounds are nearly similar, with the differences being the years they both started their crafts, and the countries they live in. Jahan Nostra’s “Violet Skies” is set to be released as the first volume in a 3 part EP series in the coming weeks.

Growing up between Connecticut and New York, Jahan Nostra developed a love for music from a young age. With the inspiration from hometown heroes Sean “Diddy” Combs, Heavy D, and Pete Rock, he pursued a career as a Recording Artist in his teens. At the age of 13, he signed with BMX Entertainment and started his independent grind with collaborative partner, Ray Kyro while in high school.

Since 2012, he has released 3 albums, collaborated with the likes of Smif-N-Wessun and Tone Trump, and has won several awards, including the Best Music Video Award at the 2019 Hip Hop Film Festival.

Jahan Nostra’s “Picture Frames” music video featuring MeaS7 is available now on YouTube at: https://youtu.be/4aqydtpQWIA. For updates on Jahan Nostra’s music and more, follow him on Instagram at @JahanNostra and visit JahanNostra.com.