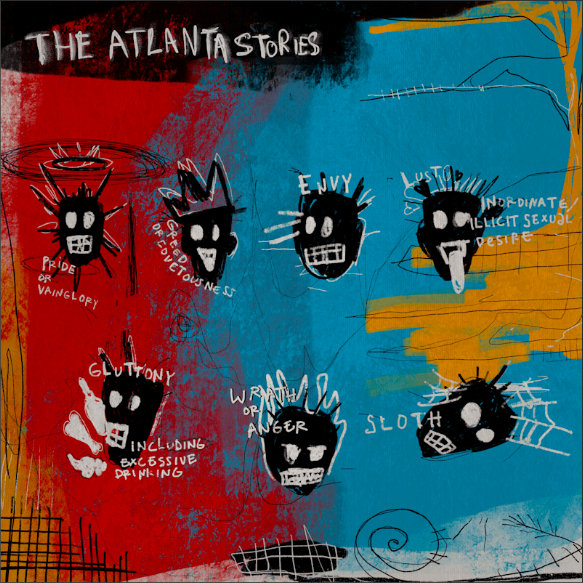 The release date for Kenny Tiller’s audio drama, “The Atlanta Stories” is scheduled for April 2023 and fans can expect to be awed by what’s in store after Tiller released the cover art for the audio drama

In the world of digital everything, album covers – like cassettes and vinyl – seem to be part of nostalgic music paraphernalia. And yet, they can be powerful social statements that warrant discussions. Kenny Tiller has shared the cover artwork for his new audio drama “The Atlanta Stories,” due April 2023.

The artwork features seven heads which, according to Kenny Tiller, represents the seven deadly sins. Designed in the similitude of a Neo-expression style that emerged in the late 1970s, Tiller shared the cover art via an Instagram post where he also dropped a hint on what fans should expect from the soon-to-be-released audio drama.

From the Instagram post Kenny Tiller shared to release the cover art for “The Atlanta Stories,” he said, “Creating this new album allowed me to still keep a message in the art. I feel you can associate all the world’s evils with the seven deadly sins which are pride, greed, lust, envy, gluttony, wrath, and sloth. My stories will rely heavily on these themes.”

Although it remains unclear what the stories will comprise, fans and viewers can expect that every episode of The Atlanta Stories will be a masterpiece on any of the seven deadly sins or a combination of some. Kenny Tiller is on track to becoming one of America’s most revered producers and directors. In 2022, Kenny released the Art of Hustle series, a crime drama about Michael Roberson, a young star basketball player who falls into the manipulative tricks of drug kingpin Richard Brown.

The Art of Hustle series quickly became a favorite as it garnered a strong following from critics and fans in the weeks following its release. Additionally, Art of Hustle was a finalist in the 17th annual Peachtree Village Film Festival which validates the quality of the series and Tiller’s expertise as a producer and director. With The Atlanta Stories on its way, expectations are high and there’s no doubt Kenny Tiller is equal to meeting these expectations with the best audio drama that would be released in Q1 of 2023.

For more information on The Atlanta Stories and its release, please visit www.rushmorefilms.com.

Kenny Tiller found Rushmore Films, and it runs on the motivation and conviction that great stories are the foundations of greater possibilities. The production company is on a mission to rewrite the old rules of filmmaking by aiming for the most excellent storytelling. To learn more, log on to https://www.rushmorefilms.com/copy-of-catalogue.