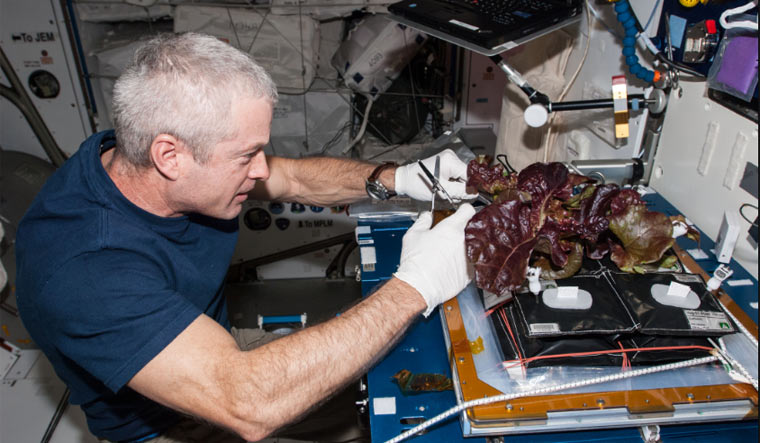 Lettuce grown in space is free of disease-causing microbes and are as nutritious as ones on Earth: NASA

According to reports, red romaine lettuce, which is grown on board the International Space Station (ISS), is as nutritious as the ones grown on the Earth. Besides, the space-grown lettuce is free of disease-causing microbes and are safe to eat.

The researchers, which include Christina Khodadad from NASA’s Kennedy Space Center in the U.S., said that the lettuce that are being grown under lower gravity and more intense radiation than on the Earth are more nutritious and safe to eat.

Often astronauts in space live on pre-packaged and processed space rations, which include, nuts, fruits, chocolate, peanut butter, shrimp cocktails, chicken, and beef among others.

The researchers even said that the fresh produce may provide astronauts with additional potassium and vitamins K, B1, and C. These are those nutrients that are less abundant in pre-packaged rations.

Ms. Christina and her team believe that the growing crops on board are useful on long-distance space missions like the NASA’s first crewed mission to Mars, planned for the late 2020s and the upcoming Artemis-III missions, which is scheduled to land humans on the lunar South pole by 2024.

In a statement, Ms. Christina said, “The ability to grow food in a sustainable system that is safe for crew consumption will become critical as NASA moves toward longer missions. Salad-type, leafy greens can be grown and consumed fresh with few resources.”

The lettuce grown onboard has allegedly opened the door for experiments with other nutritious and tasty crops onboard.

Project scientist, Kennedy Space Center, Gioia Massa said, “The International Space Station is serving as a test bed for future long-duration missions, and these types of crop growth tests are helping to expand the suite of candidates that can be effectively grown in microgravity. Future tests will study other types of leafy crops as well as small fruits like pepper and tomatoes, to help provide supplemental fresh produce for the astronaut diet.”

How To Turn A Field Into A Wildflower Meadow

Rising Music Video Directors to Watch for in 2021