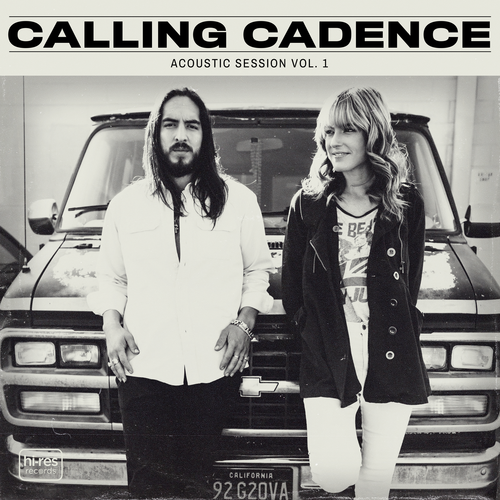 Today Los Angeles band Calling Cadence released their EP The Acoustic Session, Vol. 1 via hi-res records. For this EP, Calling Cadence’s Oscar Bugarin and Rae Cole reimagined their celebrated material from the band’s self-titled debut album in a stripped-down setting, showcasing the strength and flexibility of their arrangements and songwriting while putting their voices and playing at center stage. Bugarin and Cole’s inspirations cross a number of storied American genres like Rock, Blues, Americana, and Country.

The five songs that round out the EP are a mix of fan favorites including: “Good Day” which was #1 on CMT’s 12 Pack Countdown, a program voted on by fans,  the Motown-inspired “Just The Way It Goes” which is a revenge anthem for the casualties of the 21st-century dating scene, the Laurel Canyon inspired “California Bartender” that presents a series of vignettes about bar patrons chasing their sorrows at the bottom of the glass, the bluesy barn burner “Burn These Blues,’ and “Throw My Body,” a song that KTLA called “a new song with an old-school vibe.”

“These acoustic tracks are a pretty good representation of how we sound outside the studio,” says Cole. “The energy and sound in our live performances are a big part of the band’s makeup, and you really get a taste of that in this acoustic album. This is a great opportunity for fans to hear an even more organic sound from us, especially compared to that of the first album. The acoustic versions really take us back to the beginning…jamming away in a friend’s kitchen – with just the 12 string and 3 voices.”

Calling Cadence has received support from NPR, CMT, and the legendary Los Angeles rock station KLOS. They were featured on the popular KLOS Friday morning Heidi & Frank show, and the local KCSN. Additional radio support has come in from Nashville’s WMOT, WCNR in Charlotte, WPYA in Birmingham, WCLX in Burlington, KSYM in San Antonio, Acoustic Cafe, and more.

Calling Cadence, the band’s self-titled debut album showcases a group whose songs nod to the past while resolutely pushing forward. It’s a classic-sounding record (recorded, mixed, and mastered straight to analog tape) for the contemporary world. Computers were only employed for streaming prep and CD replication. Produced by David Swartz and Matt Linesch, the album was released on their own label, hi-res records. The producers and the band thought long and hard about diving into the all-analog domain but came to the conclusion that the final product would benefit in a way that digital would not allow. The 15 songs shine a light on Calling Cadence’s strength as a live act, blending Oscar and Rae’s entwined voices with vintage keyboards, guitar heroics, and plenty of percussive and low-end stomp. The supporting musicians on this record include Josh Adams (Norah Jones, Beck, Fruit Bats) on drums, Elijah Thomson (Father John Misty, Nathaniel Rateliff) on bass, and Mitchell Yoshida (Edward Sharpe and the Magnetic Zeros) on keyboards.

For Calling Cadence, whose name pays tribute to Oscar’s time in the Army (documented in Americana Highways), recording to analog tape wasn’t just a production choice; it was a way of maintaining honesty with themselves and their audience. Like the classic albums that inspired Calling Cadence’s layered vocal arrangements and warm, guitar-driven sound, the record is a genuine snapshot of a band on the rise. And, once again, it all comes back to harmony.

Calling Cadence will be playing at Harvard & Stone in Los Angeles on November 3rd.