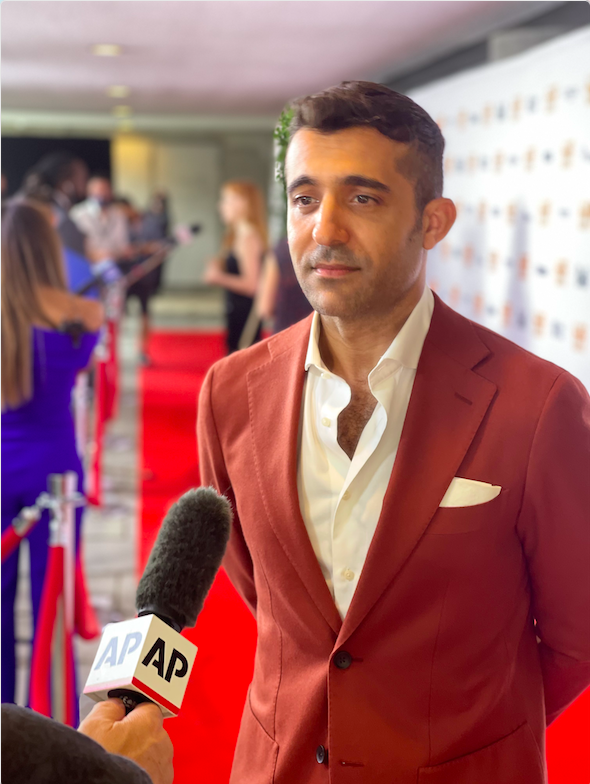 This Moroccan actor is shaking it up these days in Hollywood! While bringing a little Moroccan flair into the American movie scene, Mourad Zaoui is paving his own way as a Hollywood success story. Zaoui was born and raised in Casablanca, Morocco, a city that had little recognition or support from the film industry. This was an obstacle that Zaoui had to overcome. Growing up in this city offered little help for his acting and producing dreams. He had to realize his passions were way more important than his community’s disapproval. After calling on the use of some accredited actors, and their advice for him to follow his dreams, Zaoui did just that.

“I had a conversation about becoming an actor, my doubts, and was told, if you want to be an actor, do it, and if it doesn’t work out, at least you tried. So I joined a theater company, began performing in theater and commercials, and in 2005, I landed my first main role in a Moroccan feature film called Wake Up Morocco.” said Zaoui.

Zaoui’s break-out role in Wake Up Morocco went on to open many doors for him. The roles kept growing and growing until he was landing parts internationally, in projects based in Europe, Germany, and Italy. With multitudes of new opportunities, he was able to switch genres of films and explore movies like the chick flick Libas Jako Dabel and You Kiss Like The Devil.

To his surprise, Zaoui’s career took an exciting turn in 2013. He was approached by a casting director at the notorious American Television Network, HBO. He was invited to Los Angeles to audition for a role in a new HBO pilot, and a week later, Media Talent Group signed him. This would be Zaoui’s first-ever agency to pick him up. With no previous help from a manager, the agency assigned him to Martin Torres, who was handling big names in Hollywood at the time.

Mourad took a vow to stay in Los Angeles after his new HBO success and the pick-up from a talent agency. The dedication he has shared for his acting career was hard not to notice. The actor was able to steadily gain role after role from 2013 until today. Mourad’s hard work and strong passion for acting would provide him with amazing opportunities down the road. He landed a major role in the 2020 rougher version of a Romeo and Juliet love story, Zanka Contact. With this new role, he was able to bring out a different side of himself as an actor, as the plot of the flick was a gritty and hellish love story.

In his own words, Zaoui describes his character in Zanka Contract “I’m playing a character named Maraud,” he explained. “It’s the story of a British-born Moroccan rock star who starts shooting heroin in his neck, loses his voice…goes to Morocco to hide because he had money problems with the mob and falls in love with the prostitute. They both ran away from the pimp whom he was working for, and I got hired to catch them. But instead of only catching them, I started getting a bunch of people doing it for fun, just for shits and giggles. This sadistic, delightful character likes to torture and kill people.”

Zanka Contract was released in 2020 and gained predominant international fame, especially in the Italian market. This character was a huge switch up for Zaoui as he was portraying a torturous and “sadistic” man with a mission, as he describes in his own words.

Zaoui’s latest part is his most significant role to date. He plays the role of a butler, Hamid, in a new film titled The Forgiven. In this captivating satire of the bourgeoisie, the new drama begins as a weekend of fun but soon exposes a world of oppression. Costarring Matt Smith and Caleb Landry Jones, this cinematic piece depict the elite’s harmful thirst for materialism, wealth, and power. These evils force them to interfere with the lower class’ vocations, often with fatal consequences.

The actor had some words to say about his latest film that premiered in September, stating, “The movie is about a car accident that’s going to have repercussions on both the locals and the foreigners who are visiting. But the movie is more than just that; it’s also about a clash of cultures, and how both the locals and the foreigners view each other. Both sides realize the other side views them in a certain way,” Zaoui shared.

Zaoui’s role as the butler in The Forgiven offers much for the audience to lean on and learn from. The character is a butler yet provides much knowledge and wisdom throughout the movie, showcasing classism at its finest. Hamid the butler and Mourad himself can be seen as a moral compass and thought provoker in the film and in life as well.

The journey Mourad has had up until now has left him with great success and has put his name on the map in Hollywood. His inspiring career is one that will keep flourishing from his authentic passion for acting and producing. Zaoui realizes he is lucky to be in the position he is now, an accredited actor that made his way from Casablanca Morocco all the way to Los Angeles, California.

Rjay New Rapper On The Rise From The UK Breaking Records