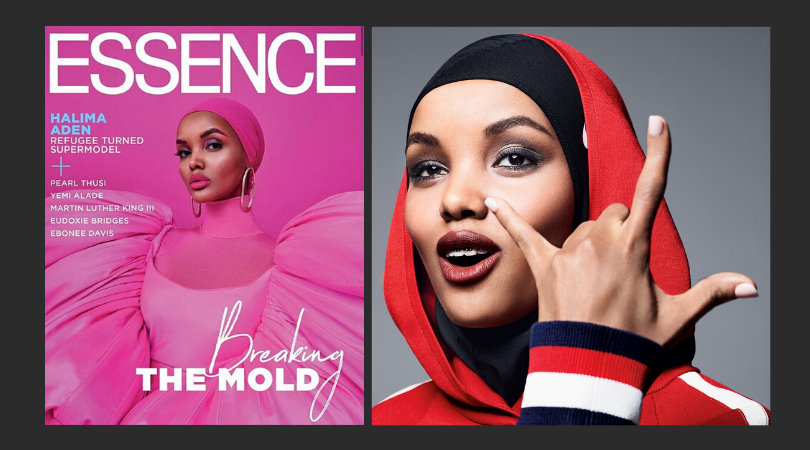 Muslim model Halima Aden has allegedly become the first black woman to grace the cover of Essence magazine in a hijab for its historic 50th Anniversary issue. She has made history once again, as earlier she appeared in a burkini for Sports Illustrated’s Swimsuit Issue.

The Somali-American model took to her social media to celebrate the news with the fans. On Monday Aden posted a photo of her in a pink hijab on the magazine’s cover on her Twitter and captioned it: “Ahhh!! My first cover of 2020 and it’s for @essence!! A huge thank you to everyone who worked tirelessly on this historic 50th-anniversary cover, I’m so thankful to be the first black hijab-wearing woman to be featured on Essence!”

Essence on the other hand, shared a news release on its website that reads: “There have been several moments in model Halima Aden’s life when she’s broken a barrier by simply being who she is.”

Aden, who is the model and activist has always been in news as she was the first Muslim homecoming queen at her high school. Besides, she was the first Somali student senator at her college; and the first-ever hijab-wearing woman to be the face of numerous fashion magazine covers, which includes Allure and British Vogue.

The statement issues by Essence reads: “In celebration of stepping into a new decade, Aden’s gracing the cover of ESSENCE’s January/February 2020 issue as the first Black female cover star wearing a hijab.”

Aden in a statement said, “It’s important for me to be visible and to do whatever I can to let girls know that they don’t have to change who they are. I want them to know the world will meet them exactly where they stand.”

The 22-year-old model was born in a refugee camp in Kenya is now celebrating her success in a grandiose way!