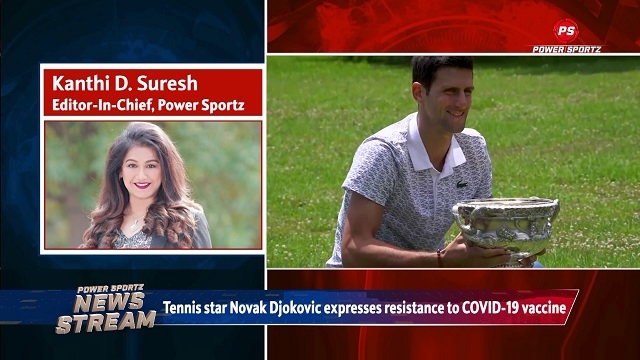 Recently, tennis star Novak Djokovic made a  statement that left everyone surprised. Djokovic said that he would prefer to improve his immunity rather taking any vaccination on COVID-19. He also said that he would have a difficult decision to make if receiving a coronavirus vaccine became mandatory to compete on the tennis circuit.

Djokovic, who is known for his extraordinary ability to shrink the court and has won 17 Grand Slam singles titles, made this comment while he was speaking with a group of Serbian players on a live Facebook chat.. However, in a statement that was released on Monday through his management team, Djokovic declined to address whether he opposed vaccines in general.

However, Kanthi D Suresh, the editor-in-chief and co-owner supported Djokovic stand and said that vaccination should not be mandatory prerequisite to participate in international sports events as long as players are able to maintain strong immunity and are not carrying any contagious virus, there is no point federations forcing vaccination on athletes. She further added, “Sports federations cannot allow the business of vaccination to dominate the spirit of sports.”

Kanthi D Suresh, Editor-in-Chief of Power Sportz is known to take bold views which are unconventional and different from the regular approach. Kanthi’s point of view and support to Djokovic, has been acknowledged on mail with a note stating that vaccine is certainly a sensitive issue.

Anastasia Beverly Hills (ABH) – A Perfect Solution For Your Brows During COVID-19 Pandemic!

Get to know Tiwaii Funchess !