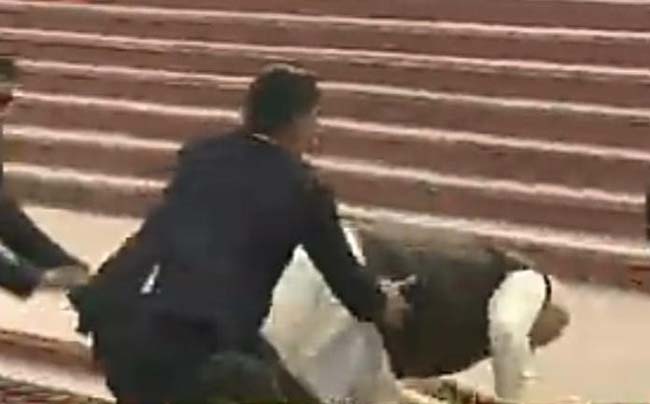 An unfortunate incident that PM tripped in the improper steps architected at the Ganges river bank platform.

The spectators started speculating that wrath will fall on the city commissioner and the program in charge, how unfortunate is their vision as they have painted in their mind that the prime minister Shri Narendra Modi is a self-obsessed personality. Of course, it is an architect blunder that the steps have been wrongly numbered and sized but the humane angle of the honourable Prime Minister to understand and amend and not retaliate drastically is put into question. Time the humane approach reaches to the masses, and the honourable Prime Minister has risen to such post and mature thought process thanks to his industriousness; undoubtedly great leaders has always adopted the approach of coconut where their hard shell in-stores a considerate and a kind heart deep inside.

Hindu Mythology has always it put forward the belief that nothing happens without reason, it is god’s indication to watch the steps. Often the kings, unfortunately, get surrounded by sycophants, and the vision of innovating and improvising as per ground realities gets unnoticed.

Thus if the honourable Prime Minister believes in the god’s indication then must watchfully move on to monitor and administer many great corrections in India – like population control law, tree implantation law, rape and honey trapping law covering both sides to ensure justice to both genders, Ganges and environment pollution control system in more pragmatic ways.

I am sure the broad psychological perspective and vision of the prime minister will come to foreplay with more energy than before, as a citizen the prayers are for a better India and better world.

Harley Medic International: One of the UK’s most reliable COVID-19 testing companies