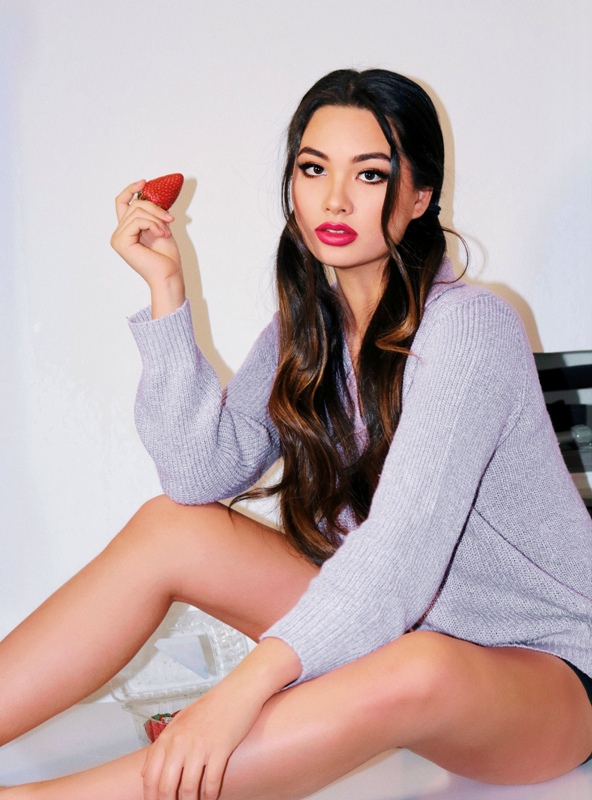 From Carnegie Hall’s young opera performer and pianist to pop music’s latest sensational recording artist, classically trained singer-songwriter Kaiza is a name we should all be watching for. With a background in music like hers, we’re not surprised that she plans to continue down it’s path in her years as a young adult. The twenty year old has been performing at various concert halls since she was just six years old, including at some of the most prestigious venues in the world. While she modestly acknowledges her past successes, Kaiza tells us she feels classical music has served her well by giving her the background she needs to succeed as a singer but has confidently decided to steer into the exciting world of modern music. She’s found a style that resonates with her, and clearly resonates with her listeners as well, as in just over a month’s time, her debut EP ‘The Writer’ has managed to reach and surpass over 100,000 listeners.

HEY KAIZA, WELCOME TO BLACKBIRD NEWS! WITH SUCH A PROMISING FUTURE AHEAD OF HER, WE NATURALLY DECIDED TO CATCH UP WITH THE YOUNG STARLET AND LEARN EVERYTHING WE POSSIBLY COULD ABOUT HER PERSONAL LIFE AND MUSICAL JOURNEY.
It’s great to meet you, Kaiza. So, you happen to have quite the following on social media. We did a little sleuthing, and we found out you also did some acting work under a different name.
Likewise! Yeah, I did a couple of short films and some other cool projects when I was living in Atlanta.

WHAT WAS YOUR MOST SURREAL EXPERIENCE AS AN ACTRESS?
Probably when one of the shorts I starred in premiered at a drive-in theater during (Covid-19). I got to see some of the cast and crew for the project after a year and that was really nice, and I had a couple of people recognize me from it in the weeks after that which was of course very surreal.

DO YOU HAVE PLANS TO ACT IN THE FUTURE?
Not really. I feel like right now I need to be putting all of my efforts into my music. It can be fun to put on the shoes of a character but right now I’m very focused on just being myself and telling my own stories. I definitely feel like I left the industry on a high note; I had a very good but bizarre experience with the last project I worked on before I called it quits. I’m very happy to leave it just as it is in my mind.

SO NOW, FOR WHY WE’RE REALLY HERE. WHAT MADE YOU DECIDE TO PURSUE A CAREER IN ENTERTAINMENT? DID YOU COME FROM A MUSICAL OR ARTISTIC FAMILY?
Well, I’ve always been much more drawn to the creative sides of things. I grew up with an older sister who was very booksmart, so it was nice that we both excelled in different things so we weren’t compared to each other as much. My parents are both now retired nuclear chemists, so I’m sure they secretly had hopes I would follow a similar life path. They had introduced and involved me in musical training and lessons since I was very young though and they saw how I thrived in those environments, so they’re really just unbelievably supportive regardless of their original ideals for my life’s direction.

IF YOU COULD CHOOSE ANY OTHER CAREER PATH WHAT WOULD YOU CHOOSE AND WHY?
I would like to be involved somehow with NASA. My father and I used to bond over all those geeky science experiment kits growing up and my dream job was and still is to be an astronaut. My close friends know I’m very much a nerd no matter how differently it may seem on the surface level. If I ever get the chance to go to space I would take it and probably not come back to Earth, ever.

WHAT INFLUENCED YOU TO BE A SINGER-SONGWRITER?
I’ve been writing music as a coping mechanism for handling life since forever, really. There are other ways of coping of course, by dancing, playing sports, getting involved with nightlife… but it’s always just been songwriting for me. If I had an experience that I wasn’t sure how to handle I’d just write about it. The situation always seems to figure itself out once I write about it.

IN TERMS OF THE OVERALL COMPOSITION, WHAT IS YOUR FAVORITE SONG ON THE EP AND WHY?
Right now ‘Girl In Red’ is the biggest hit as far as streams and feedback. That’s the one where I just channeled all of my anger and frustration towards modern dating and the ultimate lack of chivalry in the men of my generation. My favorite song on the EP is actually ‘Ultra Love’. It was written about my first experience with love. It’s hard to listen to it without feeling a rush of emotions, but honestly I think that’s what makes good music.

HOW WOULD YOU DESCRIBE YOUR FANBASE?
So incredibly supportive. There are so many times when in full honesty, I look at myself in the mirror and wonder if I’m capable of doing the things I’ve set out to do. Their support makes me feel like a superhuman capable of anything and I really do think a lot of my success can be credited to them.

YOU’VE MADE A SIGNIFICANT NAME FOR YOURSELF IN THE ENTERTAINMENT INDUSTRY. HOW DOES IT FEEL TO BE SO POPULAR AT SUCH A TENDER AGE?
Wow, that’s really kind of you! I definitely think there are a million positives to it and I feel incredibly grateful to be in my position. I mean, for negatives, I get nervous with building new friendships because of intentionality, we can thank trust issues for that, but you know, I have my core circle of amazing friends who I trust with everything and to me that’s more than enough.

WHAT DOES AN AVERAGE DAY IN THE LIFE OF KAIZA LOOK LIKE FOR YOU?
It generally depends on the day! Sometimes I’m running around with three hours of sleep and flying from one place to another whereas other times I get to spend full days in relaxation and nature. There’s hardly a place in between. No matter what, I always make an effort to prioritize my self care, which has become something super crucial to my productivity and well being. If that means sometimes I go overboard with the whole green smoothie, yoga, meditation and journaling mindset then so be it. It works really well for me.

Kaiza’s debut EP ‘The Writer’ was recorded in Atlanta, where she spent time working alongside her select choice of music producers to bring her own lyrics and melodies to life. She remarked, “I’m very grateful to have worked with some very wonderful people in the industry who understood my vision for the EP and helped make it into what it’s become.”

When it comes to philanthropy and patriotism, “The Shamsher Foundation” is one of the few organizations of its kind. It is one of the youngest and most creative thinkers in the world.

How To Choose A Web Design Company