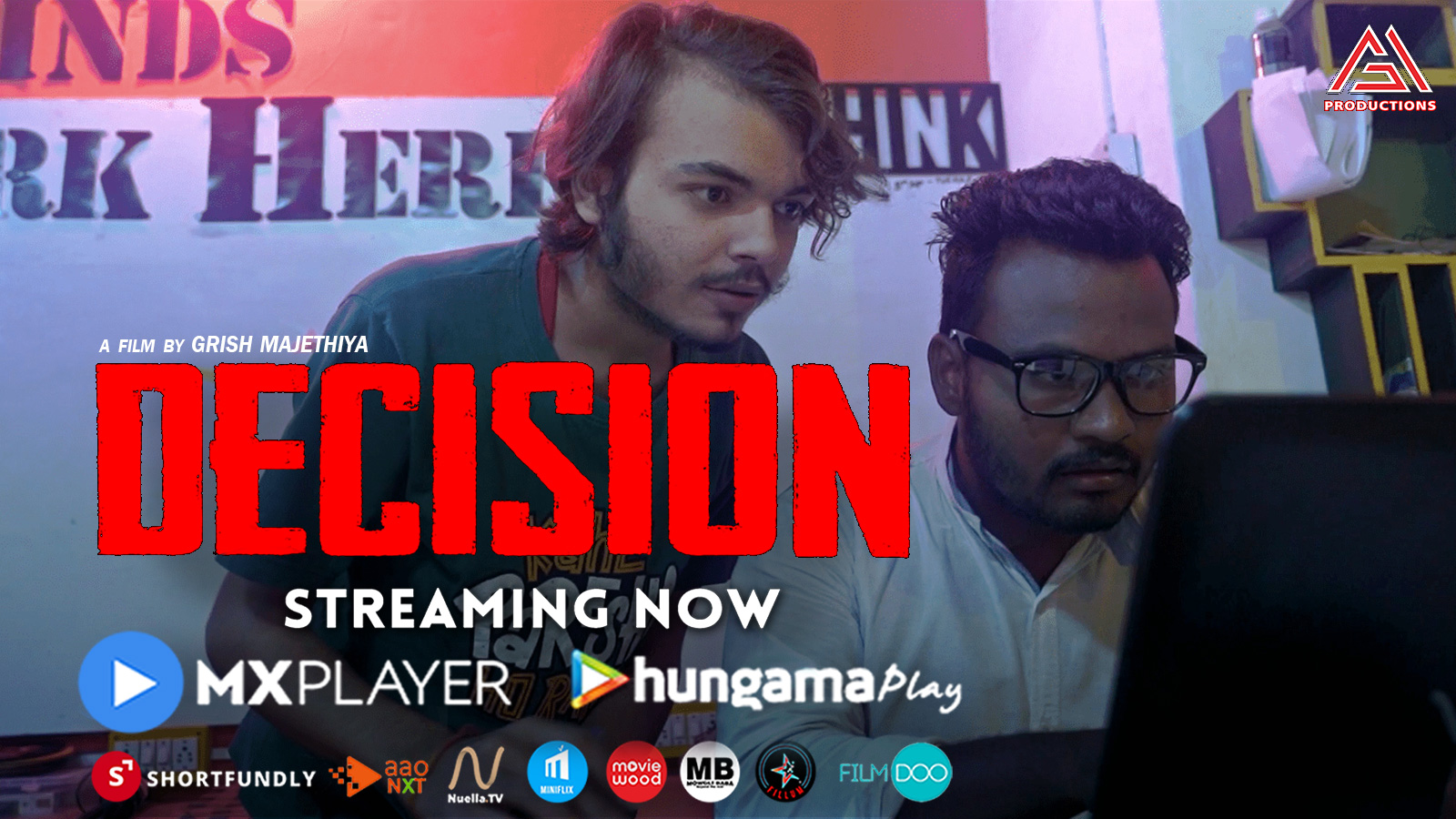 The Luminious young Indian filmmaker Grish Majethiya has completed his debut short film ‘Decision‘ is now selected in the top 100 films among 38,000 filmmakers from 332 cities and 19 countries! It was telecasted on MTV India on 7th Feb 2021 and currently streaming on multiple OTT platforms across the world including MX Player, Hungama Play, Nuella TV, Flixaz, ABC Talkies, Heeroz, Shorted, AaoNxt, Miniflix, FilmDoo, Short Fundly, Mowgli Baba, MovieWood & Fillum App. Surprisingly the short film was made in only 50 hours, right from the story-script,  shooting, editing, music, everything in only 50 hours for a film festival called 50 Hours Filmmaking Challenge Season X by India Film Project on 27th & 28th September 2020 during the Covid-19 Pandemic.

Whatever the message the film tried to convey is very important and very much needed for the time. Even today there are so many short films that explain the situation of suicides and how to recover from that, but still many people are getting suicide because of depression stress, and disappointments. We are not sure whether it is increasing or decreasing. The film conveyed more than 1 aspect which is hard work disappointment expectation and the decision. These aspects are the ones that lead us to make crucial decisions that can turn our life into something that bad.

Grish Majethiya’s debut short film “decision” tells the story of a bright college student Ashutosh played by Girsh Majethiya himself who is dealing with a scientific innovation that can change the entire world. His mentor Akash played by Akshay Borude consistently directs and propels him at whatever point he has stuck someplace. At last, after 3 years of hard work and commitment, Ashutosh prevails in his development yet nature was planning something else. It was clear that he wasn’t ready at all for the test. Will he take the ideal Decision?

About the Filmmaker- Grish Majethiya is a Young Filmmaker, Writer, Director & Actor from Aurangabad, Maharashtra. He is just  17 and studying in high school. He started his journey as an Actor at the very early age of 9 through Marathi & Gujarati Theatre Play. He started it as a hobby but in 2018, after becoming the Acting Winner of TV Reality Show ‘No. 1 Dramebaaz Season 3’ Grish decided to make it a career option. He has worked in many projects as an actor, which includes the Indian TV show ‘EPIC IQ’, American TV Series ‘Legendary Locations’ and many more. Recently he has worked in a Music Album ‘Bewajaah’ as lead Actor. The short film “Decision” is his debut short film as a writer & director (Filmmaker) which has won several awards. He has also directed the official music video of the song ‘Aa Bhi Ja’. He is founder of GM Productions. Grish also loves to write songs & poems. You can connect with Grish on Instagram @GrishMajethiya & on Twitter @MajethiyaGrish

Interview with Filmmaker and Photographer – IrrA