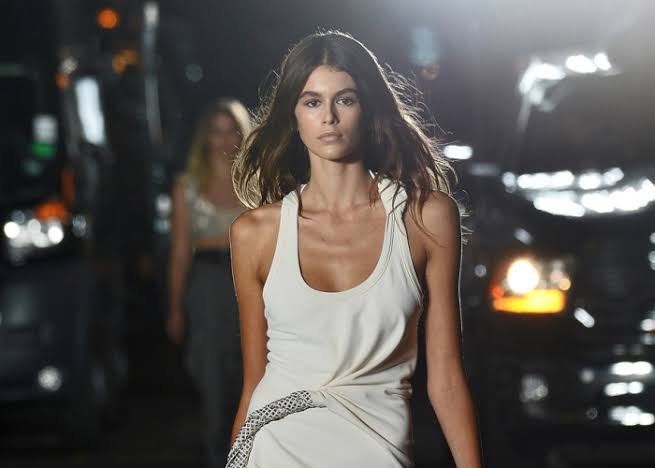 Teenage supermodel Kaia Gerber is alleged to sit on the jury of one of the most prestigious fashion prizes. The 18-year-old American, who is the daughter of former catwalk queen Cindy Crawford, has also been one of the stars of Paris fashion fortnight.

Gerber will allegedly be sitting on the jury of the Hyeres fashion festival on the French Riviera scheduled for the end of April, she along with other jury members will be deciding one of the top prizes for rising young designers.

The model recently a headline when she wore a spectacular wedding dress that closed the Givenchy haute couture show late Tuesday. The gown that she wore was alone with a show stopping structured veil. Also, the supermodel came into limelight after she broke-up with US stand-up comedian Pete Davidson.

Gerber in a statement said that the dress had left her “speechless”.

She took to her Instagram and shared her picture in gown and wrote, “Closing Givenchy haute couture”, “@clarewaightkeller you have left me completely speechless. Words will never begin to express my gratitude and appreciation for this moment. Thank you to the incredible atelier and everyone who worked so hard to make this so special.”

The Hyeres jury will allegedly be presided over by the Northern Irish designer Jonathan Anderson and his own JW Anderson brand. Also, he is artistic director of the Spanish house Loewe.

The prize they be will deciding is the oldest in the world for all the young fashion designers and in the year 2018, the Dutch couple Rushemy Botter and Lisi Herrebrugh won this prize, later they were even snapped up to lead the French label Nina Ricci. They have their own brand, Botter that made its Paris debut during men’s fashion week.

Other past winners of Hyeres Fashion Festival include the Belgian Anthony Vaccarello, and the Dutch duo Viktor & Rolf.

The festival is alleged to start from April 25 to 29.

Investor Bill Miller says stocks will rise even further in 2020

Brows Grooming is an art & Bob Scott is an artist