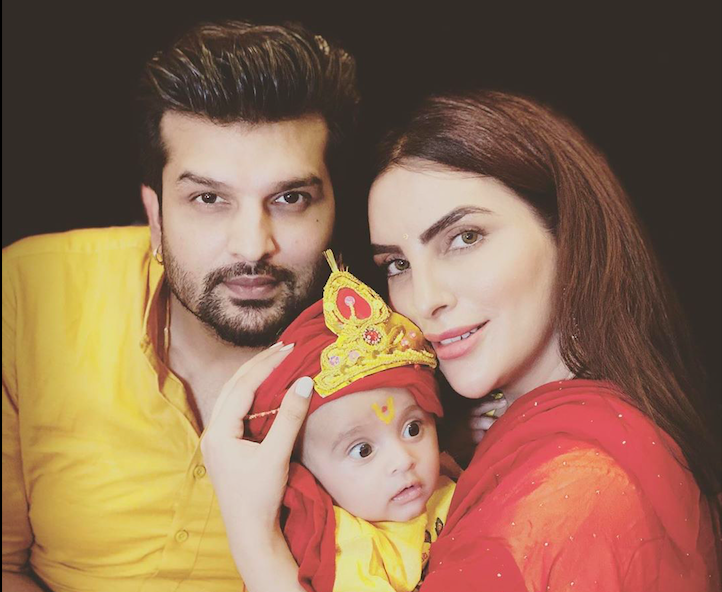 Yuvraaj Hans’ son Hredaan poses as baby Krishna, and the adorable pics will make you smile

As it was the first Janmashtami of Yuvraaj Hans and Mansi Sharma’s son Hredaan Yuvraaj Hans, the family celebrated Janmashtami 2020 with all togetherness. Following the atmosphere of the festival, the cute little munchkin is dressed as little Krishna, with a flute next to him, which completes his Krishna attire.

Hredaan’s pictures are so lovable and precious to miss. With a Lord Krishna printed yellow custom, a red turban, crown, tilak and flute, this cute toddler’s attire has everything to hit the spot. And to make the family picture just right, Yuvraaj and Mansi also colour coordinated in yellow and red, giving us the perfect pictures to adore.

Yuvraaj and Mansi frequently share the cute pictures and videos of the naughtiness of Hredaan to their huge number of followers on social media. The Janmashtami pictures of Hredaan are proof of the same.

Mansi Sharma, on the other hand, left her television show when she was pregnant. However, she will be sharing the screen with her husband Yuvraaj Hans in the much-awaited movie ‘Parindey’. The release date of it is yet to be announced. Apart from ‘Parindey’, Yuvraaj Hans has ‘Yaar Anmulle Returns’ in his pipeline too.

Yuvraaj Hans’s acting debut was in ‘Yaar Anmulle’, which was a big success at the box office. It also starred Arya Babbar and Harish Verma. Yuvraaj’s role of a shy and intelligent student made him won the debut award at the 5th Punjabi Film Festival.

An actor and a singer by profession, Yuvraaj Hans is the youngest son of Sufi singer and BJP MP Hans Raj Hans. Ever since Hredaan came to Yuvraaj’s life, the actor-singer has been sharing cute pictures and videos of his little munchkin.

Lately, he shared a video of Hredaan in which Yuvraaj sings for the toddler. Actor-singer Yuvraaj Hans and actress Mansi Sharma got engaged in 2017 and tied the knot on February 21, 2019, in Jalandhar.