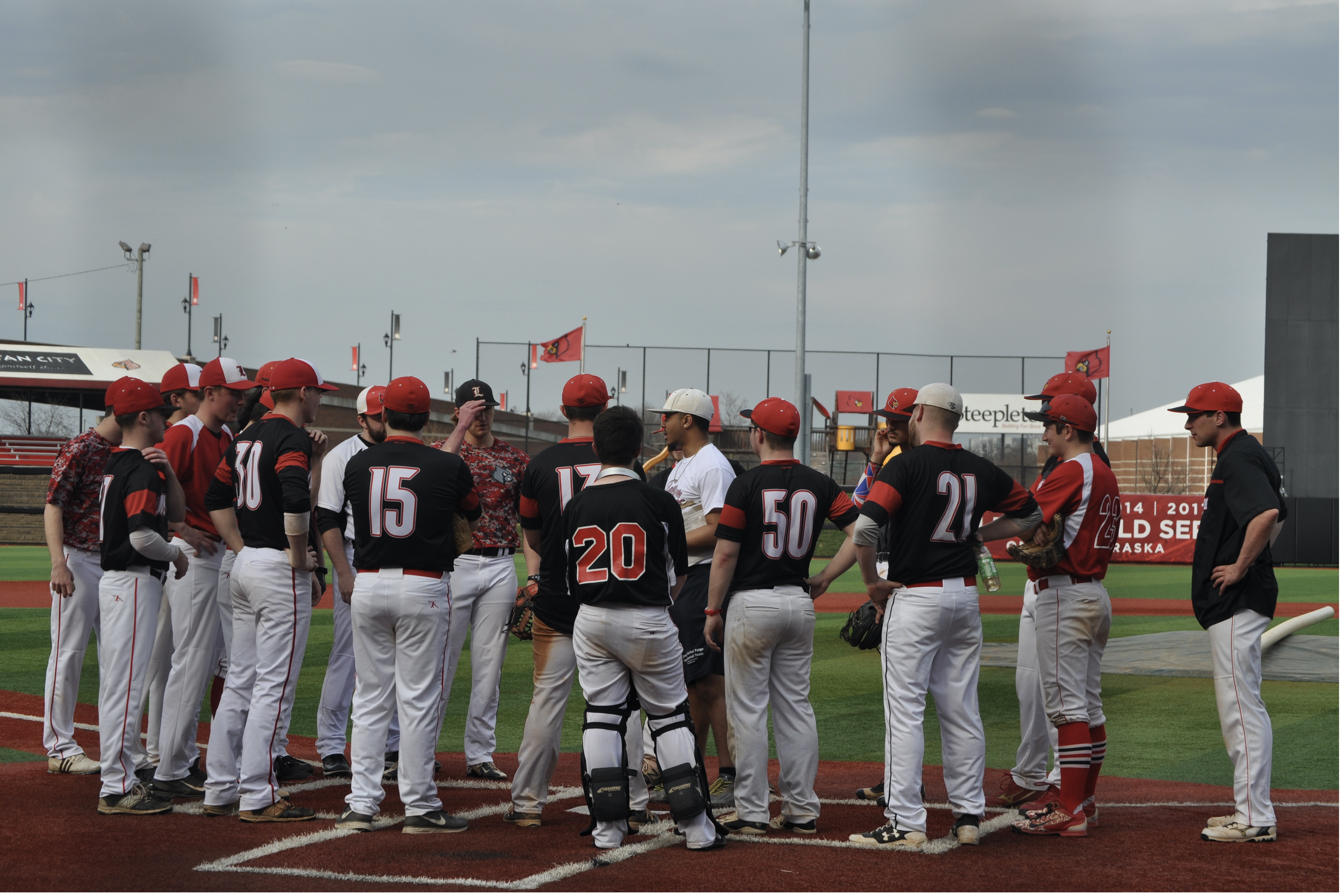 The University of Louisville Men’s Baseball team has been to four out of the last seven College World Series. Their head coach is the winningest coach in the history of the program with 605 in counting and is annually paid a 7 figure salary. This article is centered around a baseball program at the University of Louisville, however none of the aforementioned is applicable to it. Keefe Ammons is the head of the University of Louisville’s Baseball Club. The Louisville Baseball Club does not compete in the NCAA but plays a schedule open to NCBA, NCAA D3, NAIA, NCJAA and other baseball clubs at institutions around the country.  The club has been around since 2012 when St, Louis University’s current Marketing & Fan Engagement Manager, Petey Cautili founded the club.

It is no secret that over the past 14 years, Dan McDonnell has turned Louisville Baseball into a powerhouse. Back when Ammons was brought in to oversee the Cardinals Club Baseball program, no one thought that a club with under 12 players on the roster at the time would become one of the most productive and fun to watch programs in college baseball. Since taking control of the club in 2016, Ammons has led the Cardinals to increase their win percentage each season, played a part in sending 5 players in counting to higher levels of college baseball, hosted another 7 directly from higher levels and once drew a crowd of hundreds to watch the club play.

Club Baseball has produced a wide range of MLB Draft Picks, free agent signings and even players who have gone onto play at the Major League Level. Blurring the line between “elite recruit” and “club player” is an intriguing idea, but it is something Ammons sought out to do all along.

Players like Tucker Martin and Christian Canary serve as as great example of those who started out playing for Ammons at Louisville but would soon leverage their time with the club to pursue opportunities at higher levels. As an incoming Freshman last fall, Ammons all but guaranteed that Christian would be gone before the Spring season could begin. He was proved correct when Owens college offered Christian a position to patrol the outfield for them that Spring.

Then there are players like Kiron McKenzie and Nick Everette who played NCAA Division 2 baseball for Kentucky State but was not ready for their competitive career to end there. With eligibility left, they both enrolled into the University of Louisville and suited up for the Cards eager to compete for a National Title.

“I wasn’t ready to hang it up and Coach reached out to me and let me know I had a home at Louisville if I was interested in continuing my career,” Kiron McKenzie said. “It’s been a great experience playing for him. He keeps it loose enough to enjoy the game but at the same time we are all on the same page and going out there giving no less than 100%.”

Moving further, there are players like Matthew Jensen, who have loved being at the University of Louisville from day one and are just looking to compete and have fun while getting their education. Matthew will be working as a full time 7U -15U baseball coach at Camp Caribou this upcoming summer – an opportunity largely orchestrated by Ammons.

Before 2016, the Louisville Baseball Club and the Louisville Men’s Baseball team were completely independent of one another with no recognition or relationship brewing between the two. While there is no doubt that the two remain separate entities, Ammons has worked to build a relationship between the programs. In 2018, the Louisville Baseball Club made their first appearance at Jim Patterson Stadium which was a big moment for the club and its participants. In the past, the club ordered hats and team gear from the outside companies and these days a trip to Jim Patterson stadium is more than enough to fulfill those orders. Then this past August, Ammons received a call from Michael Allman – Louisville Baseball’s Director of Player Development looking for a catcher to work with the pitching staff. The first call of its kind to the program.

Catching pitching of Louisville’s caliber is not a skill that just any and every young catcher is capable of. Much of the staff can consistently toss fastballs in the low to mid 90’s, with MLB draft worthy breaking balls. Giving the opportunity to one of his players meant losing one of, if not the best catcher on his own roster but the thought to keep him never crossed his mind. He wants his guys to get opportunities.

“We don’t have far to look when looking for excellence to aspire to. The NCAA program here at Louisville is as good as it gets so building a relationship with them in any manner is a no brainer… [Being] able to work with that team in any capacity is a great opportunity for any player.” Ammons said.

Facing the #1 ranked NCBA team in the nation, West Virginia to open up the 2020 spring, Ammons starting Right Fielder and lead-off hitter from a 9-2 fall season watched from the stands. Not because he was in trouble or injured, but because he was on the roster of a NCJAA national contender and drove 4 hours on an off-day to support his former team in a 7-6 victory over the top ranked program in the country. A story that is not only telling of the successful implementation of his “next man up” mentality but also of the “family” culture Ammons has cultivated over the past 4 years.

“Our ‘Next Man Up’ motto is simple but important. Your team is only as strong as your weakest link so 1 [through] 22 is important to contribute to winning games and successful seasons. Especially if a championship run on any level is your goal.” Ammons said.

A championship run. A goal that Louisville felt they were well on their way to after being ranked as high as 8th by the Club Baseball National Invitational’s poll.  At the time of the COVID-19 outbreak, the Cardinals sat at a 16-7 record coming off of the worst weekend of the season. Due to a mix of injury and schedule conflicts, Louisville traveled without 7 of the 24 players on the roster, and dropped 3 games straight to Central Florida (4-0), Nebraska (3-0), and Mississippi State (4-0). Coming up was a key series with a club baseball powerhouse – the University of Windsor was set to to travel to Louisville all the way from Canada. Ammons looked forward to facing the Lancers at full strength but then COVID-19 emerged  across the globe.

With the rest of the season canceled, next up for Ammons was graduation in May. Graduation had initially marked the end of his tenure with Louisville but he plans to don the Louisville Cardinal cap one more spring. Many club coaches are in place because they are students or are usually without opportunity elsewhere. Neither is currently a fitting description for Keefe Ammons. Aside from experience playing professionally — he credits Leroy Franklin and Dennis Pelfrey for their influence on his own coaching style.

Over the summer, he was offered the opportunity to join a nearby NAIA coaching staff. He declined.

Soon after, he was offered the opportunity to move to Florida and coach at a post-grad program. He once again declined and elected to return to Louisville.

“Being crowned National Champions is no guarantee. I understood that when I decided to come back. I just couldn’t bring myself to leave my guys when I know we were cut short of even seeing it through.” Ammons said.

Ammons took the job in 2016 as “something positive to do” while working toward his Bachelor of Science Degree. A plethora of a grateful players, a University of Louisville Mendy Award, a coach of the year award and best season in club history later he enters his last season on a quest to fulfill the last thing on his Cardinal bucket list: A championship.

UPDATE: This article was originally written & published in September 2020. As of now the Louisville Baseball Club has not yet been cleared to return to play due to COVID-19.