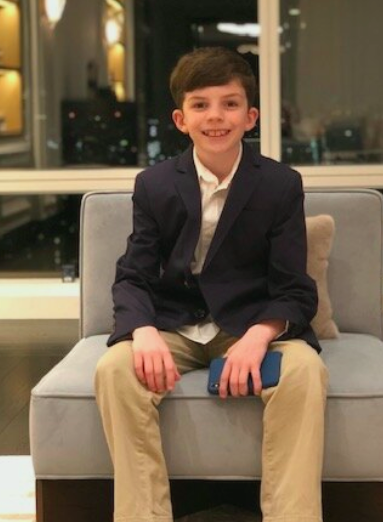 Thirteen-year-old Steven Hoffen, whose father and family are from Chicago, has made an award-winning documentary Growing Peace in the Middle East that has earned wins and nominations in over 70 film festivals globally, including the prestigious London Independent Film Festival and International Human Rights Arts Festival.

Now the 8th grader’s original short film, which delves into the lives of Jewish and Arab women brought together through hydroponic farming, has been chosen to be part of JCC Chicago’s prestigious Social Justice Film Series.  Growing Peace in the Middle East, which is one of two films that will be featured during the JCC Chicago event, will be screened on Friday, January 14th, 2022. On Sunday, January 16th, Hoffen will join fellow filmmaker Kirsten Kelley and Muslim Chicago Co-leader, Lis Rakanovic for a Live Q&A.

The young New Yorker was inspired to action following a visit to Sindyanna of Galilee, a farm in Israel where Arab and Jewish women work together closely, cultivating social change as they grow produce in hydroponic gardens. Through a series of remote interviews conducted during the early months of the COVID-19 pandemic, Steven documented the non-profit’s efforts, demonstrating the meaningful, ongoing collaboration between Palestinian and Israeli women despite their cultural differences, the importance of learning, and the economic opportunities grown through the power of agricultural science.

“I made this film to help show the world a really unique way that these amazing people are bridging their differences to address some very serious problems. In this particular case, Sindyanna brings together women whose lives couldn’t be more different, and teaches them hydroponic farming skills that help them combat food insecurity while empowering them with meaningful, skilled, uplifting work,” explained Steven.

Prestigious cinematic competitions around the globe have lauded Steven’s outstanding short film that focuses on coexistence, environmentalism, and self-sufficiency. A full list of awards received by Steven for his debut film can be found below.

To continue to raise awareness and grow the humanitarian impact of his film, Steven has formed a 501(c)(3) non-profit called Growing Peace Inc. Inspired by the outcomes at Sindyanna, the non-profit will center around hydroponics as a medium to educate, empower and help those in need. Following a successful fundraising effort that Steven himself led raising $15,000, his first hydroponics project to help an underserved community is well underway in Israel and nearing its late Q4 2021 completion target. Among Steven’s many goals for 2022, Steven is working to bring hydroponics to additional underserved communities including food banks and refugee populations.

From Psychology Academic to Author, Anna Parkman Recounts Her Dealings With Childhood Trauma In Her Soon To Be Realised Book

Pritchard Adjei is not Settled at Sittingbourne